Over 250 people attended the presentation of the book Felipe Segovia: pensamiento y obra educativa (Felipe Segovia: Educational Philosophy and Work) at the headquarters of the Spanish National Research Council (CSIC). The event was presided over by Marcial Marín Hellín, Secretary of State for Education, and Nieves Segovia, President of the SEK Education Group. Also participating were, Francisco López Rupérez, Chair of the National Board of Governors; Julio Iglesias de Ussel, Professor of Sociology at the Complutense University and member of the Royal Academy of Moral and Political Sciences, and José Luis Rodríguez, the book’s coauthor and General Technical Secretary of the SEK Group.

With this book, the Felipe Segovia Foundation pays a well-deserved tribute to the founder of the SEK Education Group through a chronological compilation of unpublished texts, documents and testimonies that span the legacy of the 50-year career of an educator that was both unique and inimitable in the recent history of education in Spain. 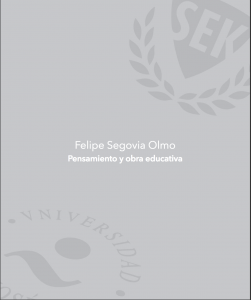